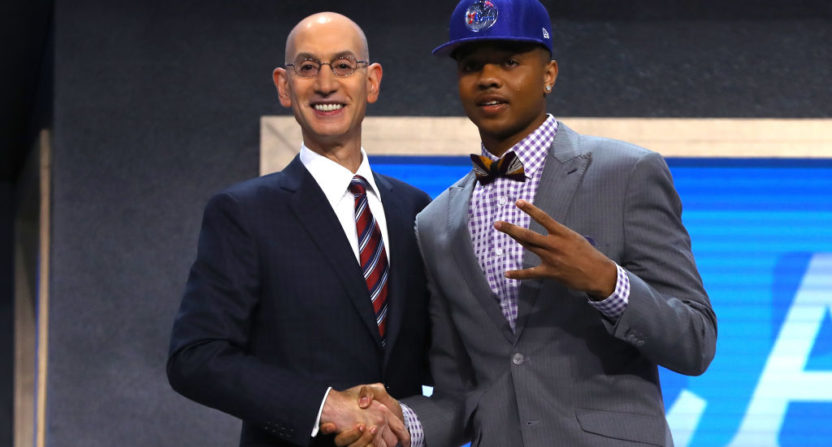 A deep understanding of analytics shows that most good basketball players throughout history have been tall. Fultz is 6-foot-4. Could the Sixers have gotten a taller person here? Sure. But Fultz is taller than the average American male by six inches, which is enough to make a difference in the sport of basketball. Solid pick.

His name sounds a bit like Jason Statham, yet he is not a tough white guy. Boston fans will feel very misled.

Life is too short to put any thought into a player picked by the Phoenix Suns.

De’Aaron Fox significantly outplayed Lonzo Ball in the NCAA Tournament, which means he could be as many as 20 times better than Michael Jordan! WOWSERS!

I see similarities between LeBron James and Jonathan Isaac. Both have two first names. Both play small forward. Both have played in the state of Florida. Crazy that the next LeBron James slipped to No. 6.

Markkanen got drafted by the T-Wolves, but is now on the Bulls. It’s hard to be high on a player who has shown zero loyalty so far in his career.

Ntilikina is likely to be a huge bust. However, he could be good. If that happens, then Phil Jackson will try to get rid of him.

I see Dennis Smith as a Magic Johnson type of point guard in the NBA. Very active penis. Can slang it with the best.

Dennis Smith with the best old tweet of any NBA draftees. ?? #NBADraft pic.twitter.com/3Yy8NvpmrD

Collins is supposedly headed to the Portland Trail Blazers in a trade. No matter what uniform he wears, it will be exciting to see him get dunked on in the NBA.

Monk has a game that is fit for the NBA. But expect him to experience some growing pains in Charlotte because Dwight Howard is there now and Monk will have to expend a lot of energy fake-laughing at Howard’s jokes.

If Kennard is to have any success in the NBA it will have to be on his athleticism alone because he obviously isn’t smart. He went to Duke, after all, and the education is so poor there that players leave believing Earth is flat. Sorry, Pistons fans, but his moron Kennard is likely an NBA bust.

Mitchell is heading to the Utah Jazz in a trade. This is a terrible fit for him. Having played at Louisville, he is used to having his time off the court filled by the transactional love of professional strippers. But Utah is perhaps the worst stripper state in America.

Adebayo is the third Kentucky player taken. If you can get the third-best player on a pretty good college team, you have to do it. Watch out for Pat Riley and the Miami Heat.

Jackson played three years at North Carolina, but getting drafted is worth 12 credits there. He is now a UNC graduate. Congratulations, Justin!

Patton is heading to Minnesota as part of the Jimmy Butler trade. If he accomplishes nothing else in his career, not playing for the Chicago Bulls is something to be proud of.

D.J. Wison is 6-foot-11, but he plays even bigger because his hair is about 4-inches high. Good pick.

What are the chances anyone who plays for the Pacers, Hawks or Blazers will ever be relevant in any way? Let’s move on.

Ferguson played a year of basketball in Australia, which should prepare him well for playing in the barren hellscape of Oklahoma.

Honestly fell asleep during this portion of the draft. Maybe another sports web-site covered it? Check NBA.com. They’re often all over this kind of stuff.

Bradley was picked by the Lakers, but is headed to the Utah Jazz. Utah has a large lake and no jazz. Really makes you think.

Spurs coach Gregg Popovich is really high on this player because he hears he doesn’t like Donald Trump.

Hart is headed to the Lakers in a trade. He is the only college senior picked in the 1st Round. Hopefully he can contribute to the team for a year or two before he dies of old age.

And … if NBA Draft Busts were made into a sitcom:

Barstool Sports' Dave Portnoy's lawsuit against Insider has been dismissed