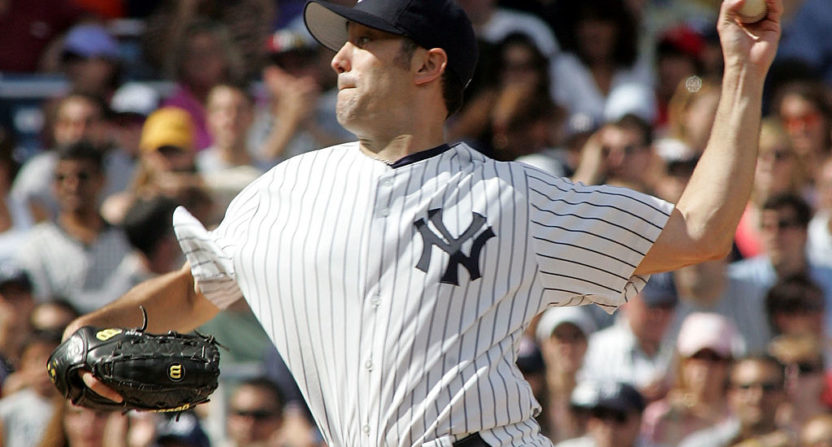 Worst player: The Yankees fired Billy Martin 25 times and then retired his jersey number. Then there is the tale of outfielder Roy Johnson, who hit one home run in 1936 and 1937 for the Yankees and got booted off the team because manager Joe McCarthy overheard him saying after a loss: “What’s the guy expect to do, win every day?” Unfortunately, Johnson fell a few dismissals short of being remembered as an all-time Yankees great.

Worst player: Yogi Berra is a Yankees legend and has his No. 8 retired. His son, Dale Berra, hit .230 in two seasons with the Yankees in the mid-80s and is best remembered for being the second out in one of the worst baserunning gaffes in baseball history. #RE2PECT

Worst player: An infielder named Nolen Richardson had 46 at-bats for the Yankees in 1935 and hit .217 with 0 home runs. In fact, Richardson managed to not get one over the wall in 509 career at-bats. And while DiMaggio had a 56-game hitting streak, Richardson once had a streak in which he got hits in five seasons in a row, before going 0-for-3 in the year 1939.

Worst player: While backup catcher Don Savage had a forgettable two seasons in 1944 and 1945 with the Yankees, hitting .256 with 4 home runs, he could have been as legendary as Joe Torre in his post-playing days if he had been handed a roster with $200 million worth of players to win a few World Series titles with. Sadly, he was never given such an opportunity and is forgotten to history.

Worst player: In 1946 the No. 7 slutted around with three forgettable Yankees players in the same season — Oscar Grimes, Aaron Robinson and Bobby Brown — before settling down in a meaningful relationship with Mickey Mantle in 1951.

Worst player: Yogi Berra and Bill Dickey are both Hall of Fame catchers who wore No. 8, making Johnny Grabowski the exception that proves the rule. As a catcher with the Yankees between 1927 and 1929, he posted a .604 OPS. So whenever a Yankees fan says the ’27 Yankees were the greatest team ever, yell “WHAT ABOUT JOHNNY GRABOWSKI?” and then punch them in the face.

Worst player: Were their Yankees players who wore No. 9 who were worse than Bubbles Hargrave? Possibly. He ended his 12-year career with the Yankees in 1930 and proved to be washed-up, posting a .682 OPS and no home runs. But he was a career .310 hitter. However, a list like this would be a waste of time if a name like Bubbles Hargrave was not included, especially considering he was nicknamed “Bubbles” because he stuttered when saying B sounds. Oh, olden times.

Worst player: Was it Phil Rizzuto? Because in 13 seasons he hit .273 and had only 38 home runs. Really? No? There was someone who wore No. 10 who was worse than that? Wow. Okay. I’ll have to do some research.

Ahhhh … here we go. Let’s go with catcher Mike Garbark. In 1944 and 1945, while other men of his generation were taking on the Nazis, Garbark took on American League pitchers and put up a .632 OPS with 2 home runs in 528 plate appearances. Remember: not all heroes wear capes or military uniforms; some wear catcher’s gear.

And now, a word from our sponsors …

Worst player: Outfielder Archie Wilson had five plate appearances with the Yankees in 1951 and didn’t get a hit. However, he did get hit by a pitch, sooooo … it wasn’t all bad?

Worst player: The ’27 Yankees were led on the mound by a 28-year old rookie named Wilcy Moore, who bested the American League that year with a 2.28 ERA. However, Moore’s ERA nearly doubled the next two seasons and then he was traded to Boston. Why did he fall apart so quickly? Because he had lied about his age when the Yankees first scouted him. He was two years older than he said, meaning he was actually a 30-year old rookie in 1927. Thankfully, no Yankees have lied about anything since. They have way too much RE2PECT for the game.

Worst player: Haha. I just remembered the Yankees retired Jorge Posada’s number. This is number retirement creep at work. Today’s 40-something retired athlete snowflakes need to be told how important and special they are all the time. Sad! Anyway … a No. 20 who did not have his number retired is Robert Eenhoorn. The Netherlands-born outfielder hit .156 in two stints with the Yankees in 1994 and 1995. Not great. So perhaps he’s considered to be the Dutch Jorge Posada.

Worst player: A first baseman named Fenton Mole played one year for the Yankees in 1949 and hit .185.  Not good.  Even worse: if any of your moles look fenton, get them checked out by a dermatologist right away.

Worst player: In 1930, the Yankees called up Massachusetts-born outfielder Bill Karlon. He had five at-bats, didn’t get on base once and never returned to the majors. Haha. That’s what you get, Masshole.

Worst player: Herb Karpel pitched 1.2 innings in the majors in 1946 for the Yankees, the entirety of his major league career. In those nearly two innings over two games he posted a 10.80 ERA. What a Herb.

Worst player: Is Mariano Rivera the most overrated pitcher of all-time? That, my friends, is a discussion for another time. What we know for sure is that he was probably better than Domingo Jean, the last Yankee to wear the number before Rivera. Jean pitched for the Yankees in 1994 and had a 4.46 ERA in 10 games. So basically he was as good as Andy Pettitte.

Worst player: Reggie Jackson was a legendary slugger. Dick Tettelbach was an outfielder who hit no home runs for the Yankees in 1955 and one total in three seasons in the majors. However, ol’ Dick never tried to kill the Queen of England, which has to be a big check in his Plus column.

Worst player: Andy Pettitte: proof that steroids don’t necessarily make you great. But enough about Andy Pettitte being little more than an above-average pitcher who just so happened to play for the Yankees and therefore was presented as a superstar by the baseball media. This is about Darrell May. You see, the Yankees so love Pettitte that while he was dicking around with the Astros in the mid ’00s, they gave his No. 46 to any rando who happened through the roster. One of them was May. He had a 16.71 ERA for the Yankees in 2005, ending a 7-year MLB career that saw him post a 5.16 ERA. Maybe May should have tried steroids.

Worst player: Bernie Williams is best known for playing the guitar and at least being a better hitter than Jorge Posada. Tony Solaita isn’t really known for anything. He had one AB with with Yankees in 1968 and struck out. However, he did play six more years in the majors, hitting .260-16-44 with the Royals in 1975 and .241-14-53 with the Angels in 1977. Had he managed those numbers with the Yankees, they undoubtedly would have retired his number.

What were the five worst movies of 2022?

12-year-old running back goes viral, does not look 12

What were the five best documentaries of 2022?