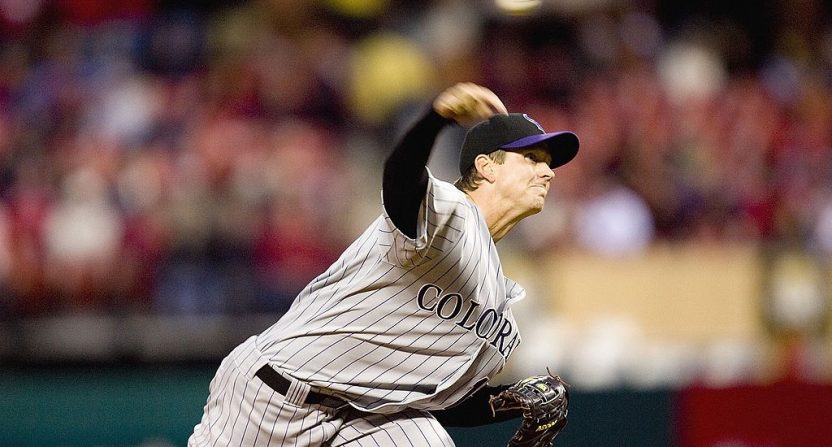 Most baseball teams like to open their season with a good pitcher on the mound. Then there are the few who go against convention and instead start pitchers who probably shouldn’t even be on a major league roster. Have to keep the opponent guessing, right?

Today the Mets have one of the best young rotations in baseball. In 2013, they had Jon Niese. In fairness, Niese wasn’t awful the season before he earned the Opening Day nod, having a career year with a 13-9 record and a 3.40 ERA. On the other hand, he is Jon Niese. But the choice was perfect for a time when the Mets were still bordering on bankruptcy thanks to Bernie Madoff. Nothing feels more like a Ponzi scheme than promising Opening Day greatness and then only getting Jon Niese.

Some people forget that before the Pirates were heavy favorites to finish in second place in the NL Central every season, they did nothing but lose for 20 years. In 2002 the Pirates opened their second season at PNC Park — a time ownership originally promised would feature a contending team — with noted pitching turd Ron Villone. Villone spent the previous season with the Rockies and Astros, where he went 6-10 with a 5.89 ERA as a spot starter. The Pirates shrewdly saw the 32-year old was a hurler on the rise, as he improved his ERA in 2002 by 0.08 points to 5.81. Yet somehow, those Villone-led 2002 Pirates still lost 89 games. You can’t predict baseball.

Seven years before the Phillies won a World Series and 10 years before Phillies pitching stars (and Joe Blanton) graced the cover of Sports Illustrated, their rotation was decidedly sub-Blanton. The 2001 Phillies handed Omar Daal the ball on Opening Day a season after he went 4-19 with a 6.14 ERA. Before The Wire premiered a year later on HBO, the term “Omar comin'” was used by fans in the Veterans Stadium bleachers to alert those around them that home run balls would soon be rocketing into their seats.

Honorable mention: the Phillies opening the season with Robert Person (2002).

In 2002 and 2004-2006, the Royals lost 100 games or more. In 2003, they had a strange blip of contention with a 83-79 record. They opened that campaign with Runelvys Hernandez on the mound, who had wowed the Royals the previous season with a 4.36 ERA in 12 starts, averaging 0.6 strikeouts per inning. Vegas oddsmakers were not as impressed by Hernandez and the Royals, making them 750,000-to-1 odds to win the World Series. Yet the Royals opened the year 16-3 behind four wins from Hernandez. He was a superstar and Royals diehards were going to be rich!

Unfortunately, Hernandez and the Royals soon discovered that he, and they, were rather terrible. Hernandez had a 7.10 ERA from May through the end of the season and was out of baseball for good five years later after posting an 8.38 ERA with the Astros. The Royals plummeted out of first place and went on to lose more than 300 games in the next three seasons.

Before Jake Arrieta unlocked the secrets of pitching in his late 20s through the magic of pilates, he was quite bad. And not major league bad. Triple-A bad (sad!). He had a 5.05 ERA with the Orioles in 2011, then a 6.20 ERA in 2012 which earned him a demotion to Norfolk where he got knocked around some more. A season later he was traded to the Cubs and began dominating major league hitters. The lesson is this: the Orioles suck at developing pitching and doing slow workouts on weird, sliding machines can apparently make one into a great pitcher and a big-time slugger. Give it a try!

The Rays so wanted Dewon Brazelton to be good that they put him on the mound in 2005 and hoped he’d suddenly pitch like a No. 1 starter instead of like number two.

He was a former No. 1 pick: Tampa took him with the No. 3 overall pick in the 2001 draft, two years after they selected Josh Hamilton No. 1 overall. Yiiiiikes. That is some rough draft history. It is now you are reminded that the Rays have never won a World Series.

But while Hamilton became a good baseball player (for other organizations) when he was clean, Brazelton pitched like he was on bath salts. In 63 career games, he had a 6.38 ERA, 8-25 record and 151 walks to 145 strikeouts. Yet despite all that failure, Brazelton somehow never started an Opening Day game for the …

You know how the Rockies supposedly give up a lot of runs because of the high altitude? Well, that’s one theory. And it’s at least a contributing factor. But is it possible that the Rockies could give up fewer runs if they had any good pitchers in their system? Here are some of their Opening Day starters since debuting in 1993:

Sweet, merciful god. And only one of those names is made up.

Also see … A Message to My Fantasy Baseball Team: I’ll Try to Remember You Exist After Mid-April This Year

Barstool Sports’ Dave Portnoy’s lawsuit against Insider has been dismissed