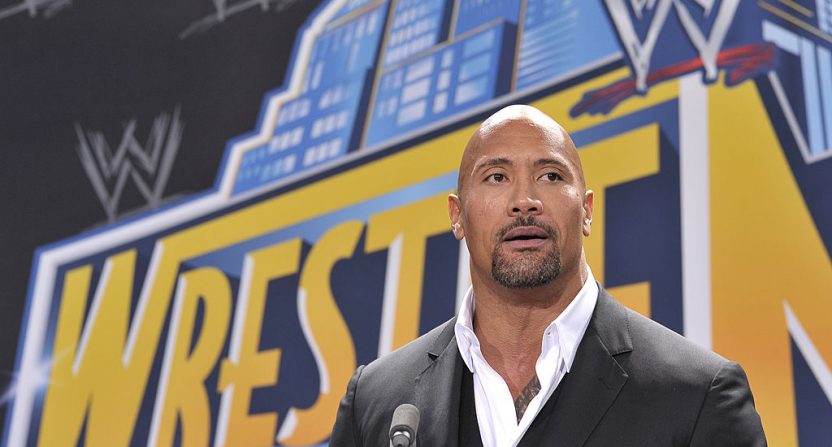 Dwayne Johnson is a man of the people, a modern day da Vinci. He is part actor, part singer, part producer, part athlete. He’s real and fake all at once. He’s big and physical and commanding. He’s the Rock. And now, according to a GQ interview, Johnson could give all of it up to make a run at the presidency.

The People’s Champion certainly seems up for the job, and we already know he can lead a Nation of Domination. The Rock’s rise to the top has been fast and furious, from ‘90s Canadian Football League washout to WWE champion to becoming the world’s highest paid actor and one of Forbes top 25 most influential people in the world.

So what other wrestlers could join Johnson in a 2020 Cabinet… if ya smelllll… what the Rock…… is cookin’!?

Brevity is the soul of wit, and what campaign slogan is even more concise than “Yes We Can”? Daniel Bryan already figured it out: “YES! YES! YES!”

The Chief of Staff is the guy behind the guy, the one pulling all the strings. Who else could it be, then, but The Chairman? Vince, Linda, Shane, and Stephanie will be running the show behind the scenes. After all, Vince is the guy that convinced Donald Trump to take a Stone Cold Stunner on national television. You can bet he’ll be the one to make the call on Comey or anyone else that gets in the way: “You’re FIIIRED!”

Can you imagine a more entertaining press conference? A crash of shattering glass and Austin emerges, a beer in each hand. He raises both middle fingers toward the enemy flag and bellows “America 3:16 says we just whipped your ass!!” He paces back and forth, staring at reporters, batting away anyone stupid enough to dare ask a question, then wraps things up, “Tune in next week, same Stone Cold time, same Stone Cold channel. And that’s the bottom line, cuz Stone Cold said so!”

Listen, someone has to actually do work around here and Ventura has all that valuable Minnesota gubernatorial experience.

This wealthy sophisticate has done anything and everything in the WWE, and you know we’re not getting the McMahons without Triple H . Helmsley already has ties to Britain and France and he’s the consummate pro. He’ll handle all the foreign policy, and if another country doesn’t like it, SUCK IT!

No one in wrestling history has had more opportunities to defend the strap. John Cena is a record 13-time world title holder, and his jorts provide all the defense our country could ever need. The Champ is here.

You know Rock is keeping it in the Anoa’i family. Like The Rock, Reigns also played football in college and the NFL (ok, fine that was Ballers). How long before he starts his acting career and goes into politics too? He’s not a bad guy. He’s not a good guy. He’s just the guy.

What, you were expecting Chris Jericho or Randy Orton? DiBiase is the guy that literally bought the championship belt off of André the Giant, the one who used to stuff $100 bills into the mouths of opponents just to humiliate them. Everyone has a price for the Million Dollar Man.

Otunga may be the Carlton Banks of the WWE, but he’s a former tag-team champion and, even more importantly, a Harvard Law graduate.

Terry Bollea may not be the best human being, but Hulk Hogan is the greatest professional wrestler of all time. Hogan already single-handedly dismantled the Iron Sheik three decades ago, and he’s taken down Yokozuna, too. Whatcha gonna do, brother, when Hulkamerica runs wild on you?

Director of the CIA — Undertaker

No one will ever attack the President again. Taker doesn’t even have to change his outfit. Enemies of the United States can Rest. In. Peace.

CM Punk made wrestling cool again, and yes this is a real Cabinet position, how dare you. Besides, we’re gonna need someone to tear down that fourth (Mexican) wall.

Hart is technically Canadian, but let’s be honest, we’re not feeling great about the collective national intelligence of the U.S. right now anyway. Bret Hart is a sharp shooter, and we already know he isn’t afraid to lie and cheat to get what’s needed. We could do worse than to rely on an actual hitman — the best there is, there best there was, the best there ever will be.

You’ve heard of killing two birds with one stone, but what about appointing three government positions with one Rock? Mick Foley is all things to all people. Dude Love has the tie-dye hippy happiness to energize a nation, Cactus Jack is the only real agriculture choice, and what better ambassador could there be to all Mankind? Have a nice day!!