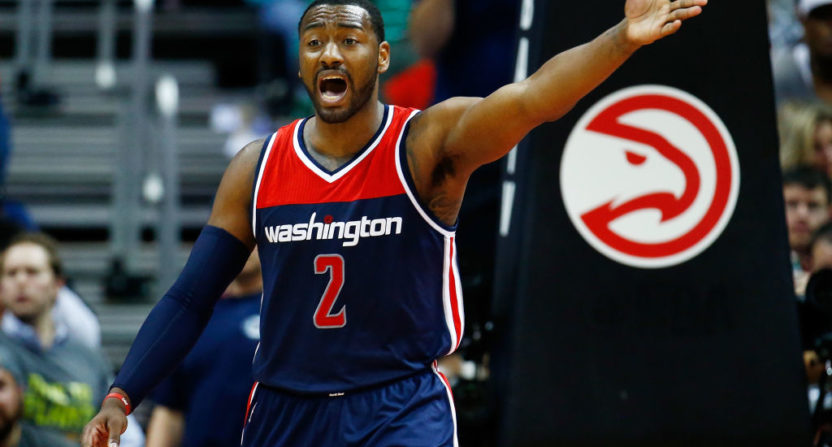 There are some sports towns with teams that do nothing but lose. Buffalo, for example. Cleveland until LeBron was nice enough to return to Northeast Ohio. Philadephia, where now even the Flyers and Eagles aren’t even playoff also-rans. San Diego with the Chargers and Padres.

And then there are sports towns with teams that frequently make the playoffs and contend … yet still fail to win anything. These are cities with teams that inevitably get the hopes of their (dumb? foolish? naive?) fans up most every postseason, only to then flame-out in dramatic fashion.

But which city is the BEST at losing when it matters? Consider each town’s case and then vote for your failure choice at the bottom.

The Braves were the baseball version of the ’90s Buffalo Bills from the early 1990s through the 2013 season. Seventeen postseason appearance in 22 years and all they got out of it was a single World Series title in 1995 — and that was over Cleveland, which should barely count. Pitching is supposed to win in the postseason, but with Greg Maddux, John Smoltz and Tom Glavine, the Braves always managed to lose. Actually kind of impressive!

The Hawks have made the playoffs 10 years in a row and once got as far as the conference finals in the pathetic Eastern Conference and then proceeded to get swept by LeBron James. The Hawks were like this even before their recent run of … success? … making the playoff 35 times in 44 years between 1956 and 1999, but won it all only once in 1958. But that was when the franchise was located in St. Louis.

The Falcons, as you may have heard, blew a 28-3 third quarter lead in the most recent Super Bowl. They have never won a championship in 41 years in the NFL, despite making 13 postseason trips since 1978.

The Atlanta Flames and Atlanta Thrashers no longer exist. Sad!

The Texas Rangers have made the postseason five of the last seven years, but the best they’ve managed to do is lose the World Series twice. Their most impressive defeat came in 2011 when they had a 3-2 series lead over the Cardinals, but blew a 7-4 lead in the 8th inning. Failure like that is enough to make a manager try cocaine (but just once!).

The Mavericks have made the postseason in 16 of 18 years with just one championship to show for it in 2011, proof that Mark Cuban’s ventures can fail with as much frequency as Donald Trump’s.

And then there are the Dallas Stars, who have been to the postseason nine times since Brett Hull stood in Dominik Hasek’s crease to win the Stanley Cup 18 years ago. But in a city that loses as much as Dallas, they’ll happily take even a tainted title.

The glory years of the Houston Astros fell between 1997 and 2005, when they made the postseason six times in nine years and peaked with a humiliating sweep in the World Series to the Chicago White Sox (apparently a real baseball organization?) in 2005. The Astros have since rebuilt and made the playoffs in 2015, when they lost 3-2 in the divisional series to the Kansas City Royals, but only after the state’s dumbass governor tweeted this. 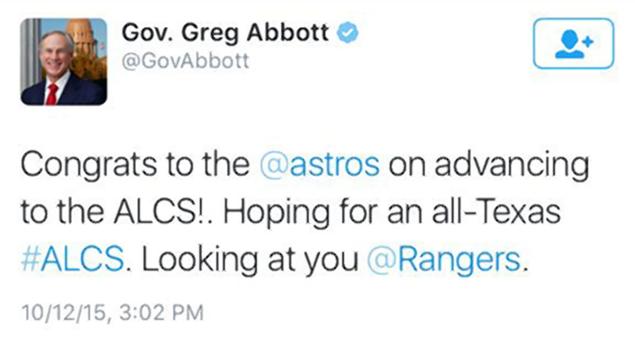 The Astros are very good so far this season, so it will be interesting to see how they blow it in October.

In 50 seasons of existence, the Rockets have made the postseason 31 times. But they only won titles in 1994 and 1995. But watch out: if LeBron James, Steph Curry, Kevin Durant and Kawhi Leonard all try to give baseball a try, the Rockets could be hoisting trophies again.

Oh, Texans. What would the modern NFL postseason be without you humiliating yourselves on national TV? Four of the past six seasons the Texans have made it to the playoffs. They have yet to make it out of the divisional round and their average elimination loss margin is 17 points.

Where to even begin. The Nationals, with franchise saviors Bryce Harper and Stephen Strasburg, have won 95 games or more in three of the past five seasons, but have yet to make it out of the first round of the playoffs.

The Wizards (then the Bullets) made the playoffs five years in a row from 1984 to 1988 but never made it through the first round. Then they made it four years in a row from 2005 to 2008, only to never get past the second round. And now today’s Wizards have made the playoffs in three of the last four years, but have been stopped in the second round each time. However, there is hope with John Wall and Bradley Beal. If everything breaks right, these Wizards have the look of a team that could lose to LeBron in the conference finals for the next three or four years.

Washington’s football team is a national punchline, true. But unlike the Browns, this joke often manages to be in playoff contention. Despite that, they have won a grand total of three playoff games in 25 years. Fun Fact: the bare minimum of wins needed to win the Super Bowl in a single postseason is three.

And then there are the Capitals, the modern gold standard for playoff failure in major professional sports. Nine trips to the postseason in 10 years, three times after winning the Presidents’ Trophy for having the best record in the NHL, and not a single time did the Capitals even reach the conference finals. In fact, no Washington, D.C. sports team has made it to even the conference finals round since the Capitals did it in 1998. (They then moved onto the Stanley Cup Finals and were promptly swept by the Red Wings.)

Okay, so which competitive sports town is the best at losing when it matters? Vote!

Which NBA teams could go from missing the playoffs to making a deep run in 2022?

… or pretend to be Alex Trebek. Basically, he’d rather be anywhere than involved with the Green Bay...

College Football is one of the most popular spectator sports in the United States of America The top...

There has always been a dichotomy between land-based gambling and online gambling. Some prefer indulging in the physicality...

Depending on who you talk to, the Quarterback position is arguably the most important position on the field....

Which NBA teams could go from missing the playoffs to making a deep run in 2022?

… or pretend to be Alex Trebek. Basically, he’d rather be anywhere than involved with the Green Bay...

College Football is one of the most popular spectator sports in the United States of America The top...

There has always been a dichotomy between land-based gambling and online gambling. Some prefer indulging in the physicality...

Depending on who you talk to, the Quarterback position is arguably the most important position on the field....