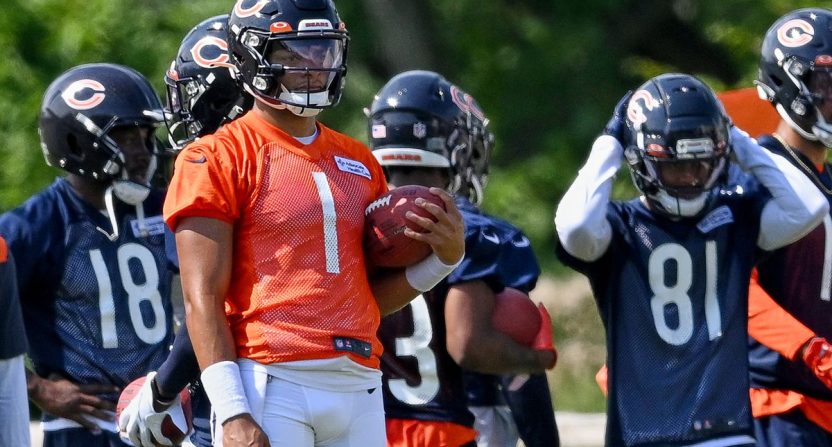 New Chicago Bears general manager Ryan Poles may look to perform one more big splash before the team opens up their season at home against the San Francisco 49ers on Sept. 11.

According to Ian Rapoport and Mike Garafolo of NFL Network, Chicago has “received calls” on offensive tackle Teven Jenkins. Rapoport added that the team has “held trade talks” on the 2021 second-round pick. and have held trade talks centered around

The Oklahoma State product was drafted in the second round (39th overall) by the Bears in 2021. The 2020 First-team All-Big 12 selection was limited to six games last season due to injuries, and he only played 37 percent of the team’s offensive snaps in those six contests.

Some may be surprised to hear about the Bears’ willingness to trade Jenkins. Pro Football Focus ranked their offensive line 31st overall heading into 2022. Former Green Bay Packer Lucas Patrick was the only notable offseason addition to the o-line.

If Poles ends up trading Jenkins ahead of Week 1, that means fellow sophomore Larry Borom will likely slot in as the starting right tackle.

The Bears are one of several teams that fans can bet on through the BetMGM Illinois sportsbook, which is offering new customers a risk-free bet of up to $1,000. Through BetMGM, you can place all sorts of different bets — including money lines, parlays, prop bets, futures and more.

Chicago has the lowest odds of winning the NFC North division at multiple sportsbooks, including FanDuel (+950) and DraftKings (+1400).

Many fans, scouts and pundits were surprised when Poles decided to use his early-round selections on defensive players as opposed to upgrading the supporting cast around second-year quarterback Justin Fields.

The regular season hasn’t started yet, but Bears standout cornerback Jaylon Johnson is pleased with what he’s seen from the rookie defensive backs thus far.

“Honestly, I would say they’re surprising me a lot more than I would expect,” Johnson said after Tuesday’s practice, per Josh Schrock of NBC Sports Chicago. “I would say, I’m going to start with Kyler first, just his versatility, being able to play and learn the nickel spot. That’s not an easy position, single-handedly, to learn. But for him to initially come in and learn the corner, then transition to more of that nickel back, it just shows his IQ of the game, shows his learning ability, being coachable.

“Then Jaquan, I didn’t really know too much about him coming in,” Johnson continued. “I had a lot of question marks, but just seeing him play, and having conversations with him, and working out after practice, he’s definitely hungry for success. He’s definitely a competitor. He wants to win, and I love that to start with, for sure.”

The Bears are frequently among the NFL’s top defensive teams, but the unit oftentimes struggled in 2021 even though Robert Quinn notched 18.5 sacks, a franchise single-season record. Chicago was 22nd in scoring (23.9 points allowed per game), though they finished with the No. 3 passing defense (191.6 passing yards allowed per game).

Chicago traded away linebacker and sacks specialist Khalil Mack in a cap-dumping move to the Los Angeles Chargers earlier in the offseason, so the pressure is on the young defense led by first-year head coach Matt Eberflus to really step up here.

If Gordon and Brisker can make immense contributions early and often, the Bears’ usually stingy secondary will give them every chance to win in a rebuilding year with minimal expectations.

As Fields prepares to endure his first full season as the Bears’ starting quarterback, the Ohio State product has already set two high goals for himself.

“I want a Super Bowl. That’s all I care about and I want to beat the Green Bay Packers,” Fields said during an appearance on Bears All Access (h/t Daniel Greenberg).

The Bears have one Super Bowl victory in their history, and that was back in the 1985 season. The franchise last played in the big game 16 seasons ago, when they fell to the Indianapolis Colts in Super Bowl 41.

Chances are that if the Bears are to win a Super Bowl under Fields, they’ll have to find a way to get past their longtime division bullies.

Aaron Rodgers’ dominance of the Bears over the years has been well-documented. The four-time NFL MVP, who became the Packers’ full-time starter in 2008, has only lost five times to the archenemy team.

Green Bay has swept the season series over Chicago in each of the last three years. In fact, the Bears have just one victory over their main rivals since the 2016 season (Week 15 of the 2018 campaign).

The Bears have the most wins among all NFL franchises with 783, but the Packers are right behind them at 782. Chances are high that Green Bay will have moved ahead of Chicago within the first few weeks of the 2022 season.