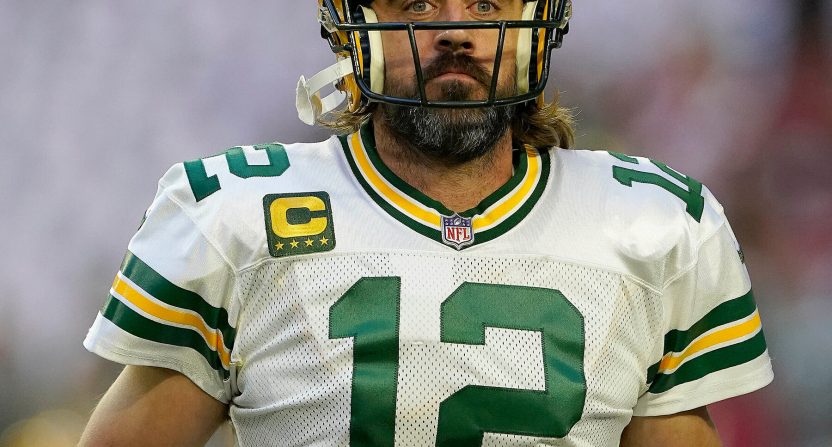 The NFL announced its findings on Tuesday after completing its review of the Green Bay Packers’ Covid-19 protocols. In those it determined that the Packers didn’t enforce the rules appropriately and failed to report Rodgers’ and Lazards’ attendance at the organisation’s Halloween Party.

The NFL has strict rules regarding unvaccinated players, one of which is the prohibition of attending large gatherings and groups of more than three. Rodgers and Lazard were deemed to be in violation of this protocol.

The amount of the fines levied on both players and team is in accordance to the fines and protocols that were jointly agreed upon by the NFL and the NFL Players Association.

Green Bay’s veteran signal-caller and the league’s reining MVP tested positive for Covid-19 last week, following the Packers’ pivotal 24-21 win over the then-undefeated Arizona Cardinals. The circumstance surrounding his positive test brought to light his vaccination status when it was announced that he would be ineligible for Sunday’s game against the Kansas City Chiefs. Had Rodgers been vaccinated, he could have been cleared to play on Sunday if he tested negative for the virus twice in a 24-hour period before the game.

The backlash that followed wasn’t so much about Rodgers’ vaccination status – that’s a personal choice, and the right of every individual to make in their own interest – but rather about having inadvertently mislead the media. In response to direct questions about his vaccination status, Rodgers claimed he was “immunised.” He didn’t clarify further and the media didn’t press the matter, leaving all and sundry to assume that he was vaccinated. It turns out, he underwent a homeopathic treatment of sorts to boost his antibodies.

Rodgers isn’t the only athlete to not get vaccinated and he’s certainly not the first athlete to catch Covid-19. However, his choices have had unfortunate consequences that go beyond his pocket. The Green Bay Packers lost last Sunday in his absence.

Therefore, the premium on the date with the Kansas City Chiefs at Arrowhead Stadium couldn’t have been any greater. But it wasn’t meant to be. In Rodgers’ absence, the Packers were simply unable to deliver and lost 13-7 to the Chiefs. Consequently, they slipped to a 7-2 record on the season and into second-place in the NFC standings.

There’s only one bye in each conference and the Packers were in pole position for it before Rodgers came down with Covid-19. The Packers still have eight games before the season concludes, though they might rue this Week 9 loss yet.

Backup quarterback Jordan Love made his belated NFL debut against the Chiefs in Rodgers’ absence. Any thoughts prior to the game about Rodgers potentially being replaced by the second-year quarterback this season were quickly dispelled. Love’s debut left much to be desired, suffice it to say. And while the final score showed only a 6-point margin of defeat, the game was not that close at all.

Green Bay caused quite the stir in the 2020 NFL draft when it traded up to select Jordan Love, and although Rodgers wasn’t overly vocal about the situation, it was clear that it didn’t go down well with the veteran. It was likely the undercurrent for this year’s offseason drama between Rodgers and the Packers too, which was the subject of great debate amongst NFL analysts and experts.

Parallels were drawn between Rodgers’ situation as the backup to Brett Favre over 13 years ago, and how his debut effectively brought an end to the Favre era in Green Bay. Fortunately for Rodgers, history didn’t repeat itself.

Of course, it’s not fair to judge a young, inexperienced quarterback on the merit (or lack thereof) of one game – a game that was on the road and in one of the toughest stadiums in the league, no less. The circumstances he found himself in weren’t ideal. And that’s not including the brouhaha over Rodgers, Covid-19, vaccines…la, la, la.

Nevertheless, Love’s performance did underscore just how important Rodgers is to this Packers team right now. This is his team, and it will only go as far as he takes it.