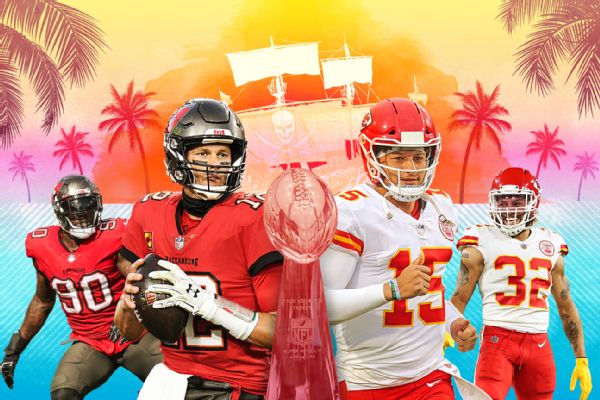 In early September, the 2021-22 NFL season will officially get underway when reigning Super Bowl champions Tampa Bay Buccaneers host the Dallas Cowboys. With just under two months to go, fans are trying to work out which teams will have the most impact in this new campaign, and which will make it to the playoffs in the new year.

Naturally, the Buccaneers are one of the favorites to once again become champions, according to NFL odds with the major bookmakers such as BetOnline. They dominated the Kansas City Chiefs 31-9 in Super Bowl LV and will enter the 2021-22 season without having lost many of their key players.

It’s incredible to think that, at age 43, Tom Brady needed just one season to lift the Lombardi Trophy with a new franchise after leaving the New England Patriots. Now, he will have had more time to get acclimated to coach Bruce Arians’ system and has the extra boost of a recent contract extension.

Rob Gronkowski has also re-signed, as has Ndamukong Suh while Quarterback Kyle Trask was drafted in to bolster the roster. The Bucs also look to have a fairly straightforward path to the playoffs from the NFC South and are priced at roughly -560 with DraftKings to make the postseason.

That being said, they’re not the frontrunners to win the entire NFL championship. At odds of +600, they are slightly less favored than the Chiefs, who are sitting at +500. This is largely because of their nigh-unstoppable passing game trio, which consists of quarterback Patrick Lahomes, receiver Tyreek Hill and tight end Travis Kelce.

Those three names are a devastating force when they’re all fit and healthy, which is why bookmakers like DraftKings have the Chiefs leading the pack at this early stage. Of course, injuries, the draft and other player moves could change things but, right now, Kansas looks like the team to beat.

They shouldn’t face much resistance in the AFC West, and are priced at -1000 to win their division. No other franchise is as heavily favored by bookies to prevail in their respective division.

The Cleveland Browns gave the Chiefs a run for their money in the 2020 postseason, losing out 22-17 in the Divisional Round. They may not be one of the hottest tips with bookies, priced at +1600 to win the Super Bowl, but they’ve certainly got the capacity to spring a few upsets.

Last year, they were hampered by injuries. Rookie Grant Delpit tore his achilles and was out for the entire season, when he would have undoubtedly started as safety. Their defensive line also took a hit when Cornerback Greedy Williams was sidelined for the whole campaign.

Linebacker Jeremiah Owusu-Koramoah, John Johnson III, Troy Hill, and Greg Newsome II have all also been brought into the fold at Cleveland and will likely make a noticeable difference to their backline and offensive maneuvers.

They’ve also got reigning Coach of the Year Kevin Stefanski at the helm and, unlike other teams who appear to be having some quarterback troubles, the Browns are onto something special with Baker Mayfield, who only keeps improving.

Over in the AFC East, the Buffalo Bills also looked primed for a solid 2022 run. Stefon Diggs, after moving from Minnesota, notched 127 catches and 1,535 receiving yards last season, more than any other player in the league.

After a slow start in 2020, the Bills’ defense found their form and produced some thrilling performances and should go into this new season with some real momentum. Their main area of weakness is their lack of a potent rushing attack, which is part of the reason why they’re priced at longer odds of +1100.

This brings us to the Green Bay Packers who, earlier this year, were one of the leading favorites to prevail above all other franchises in 2022. However, star quarterback Aaron Rodgers – who earned his third NFL MVP award last season – now wants out of his contract with the team.

That being said, head coach Matt LaFleur has accumulated impressive records with the Packers and proven many people wrong when he was derided as the pick to take control of the team a few years ago. If Rodgers does leave, it will be fascinating to see how Green Bay cope without him.

The Los Angeles Rams are also in with a shout of Super Bowl contention after their blockbuster acquisition of quarterback Matthew Stafford, who is a substantial upgrade to their offense. Their odds are +1300 to win the Super Bowl.

With Brady helping to lead the Bucs to Super Bowl victory last year, the franchise is one of the top favorites to make the championship game this coming season, but the competition is wide open.

The Chiefs, who lost to Tampa Bay in the most recent Super Bowl, will be looking to maximise the talents of their dazzling offensive line while teams like the Cleveland Browns and Buffalo Bills have proven they have what it takes to push for the title as well.

Fox moved its scorebug down between early and late NFL games, prompting NFL RedZone to add its own scorebug