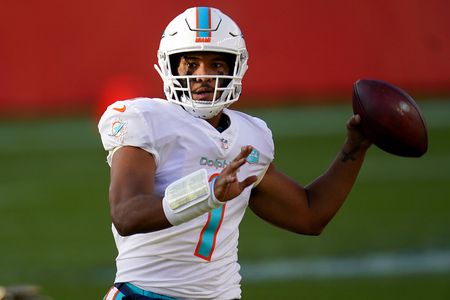 Jeudy a Beauty in Mile High

Alabama’s Jerry Jeudy was one of the Big 3 receivers in last April’s draft along with Tide teammate, Henry Ruggs III, and Oklahoma’s CeeDee Lamb. The general consensus was that all three would be first-round selections and Lamb would likely fall off the board first, followed by Jeudy and then Ruggs. There were NFL odds for the respective teams and where these players would go in the draft.

Well, things don’t often go as planned in the NFL Draft and while all three college superstars did hear their names called in the opening round, it was Ruggs who was tapped at No. 12 by the Las Vegas Raiders, followed by Jeudy at No. 15 to Denver, and finally, Lamb was available for the Dallas Cowboys at 17th overall.

Halfway through their respective rookie seasons, Lamb has the best stats of the three rookies with 44 catches for 595 yards and three trips inside the end zone. However, Lamb has been part of a much more explosive and aerial oriented offense in Dallas, at least until Dak Prescott got injured. With Prescott under center, Lamb averaged nearly six receptions and 86.6 yards per game. After Prescott went down, the 21-year-old speedster averaged 3.75 receptions per game and 40 ½ yards per contest with only one touchdown in the four games sans Prescott.

If we take a gander at Jeudy’s stats in Denver, we see that the former Tide receiver has the following season totals: 30 receptions, 484 receiving yards, and two touchdowns. However, as Jeudy has become more familiar with catching passes at the professional level, the Broncos’ game plan has shifted more to him as their main receiving target. Consider over the past two games alone that Jeudy has been targeted a whopping 24 times with 11 receptions for 198 yards and one touchdown. Moreover, the sportsbooks are currently posting odds on postseason awards, like Rookie of the Year, as well as lines on the matchups each week.

In his last outing, the first 100-yard game of his brief NFL career, Jeudy said all of the right things after the Raiders dropped a 34-27 decision to the Falcons in Atlanta, “If we don’t finish with a dub {W – win}, it doesn’t mean nothing,” Jeudy said. “I’m tired of losing. I want to do everything I can to make the team better and us better as a whole. Going out there in practice (every day), that’s what I remind myself of.”

Broncos head coach, Vic Fangio, remarked on Jeudy’s progress after Sunday’s loss, “He’s made really good strides here the last couple weeks, and the last two or three games,” Fangio said. “I really like the way Jerry’s been playing and I like where he’s headed. He’s been practicing better and it translates to the game… His arrow’s definitely up, and he’s what we thought we got when we drafted him.”

The Dolphins drafted Tua Tagovailoa as the fifth overall pick in the 2020 NFL Draft, which was pretty much the plan all along, as evidenced by the chants to “Tank for Tua” last season. But a few things happened that almost derailed those plans. Namely, Miami was a bit better than everyone anticipated and wound up with the fifth overall pick and not the first. Secondly, Tua suffered a gruesome dislocated hip injury against Mississippi State that cast a pall over his future and his prospects for being a top-five pick.

Nevertheless, the moon and stars aligned when four names were called, none of which were Tua Tagovailoa, leaving the Dolphins with their prized quarterback of the future still on the big board. Miami promptly selected Tua and prudently decided to allow him to watch and learn when the season kicked, leaving well-traveled veteran, Ryan Fitzpatrick, to do the honors under center.

However, after only six games, Fitzpatrick was demoted in favor of the young Bama product waiting to show the world his talents and prove why Miami was wise to trust their future in his capable hands. Tua has had only two starts but the early returns are encouraging. In his last performance, he went toe-to-toe with another burgeoning superstar, Kyler Murray, and led the Dolphins to a 34-31 victory in the desert over the Cardinals.

It’s too soon to tell whether Tua will be a boom or a bust in the NFL but so far, the signs are all positive and he has yet to experience the bitter taste of defeat at the professional level when in the starting role. Ultimately that time will come, but for right now, the Dolphins have to be ecstatic with the biggest fish in South Beach.