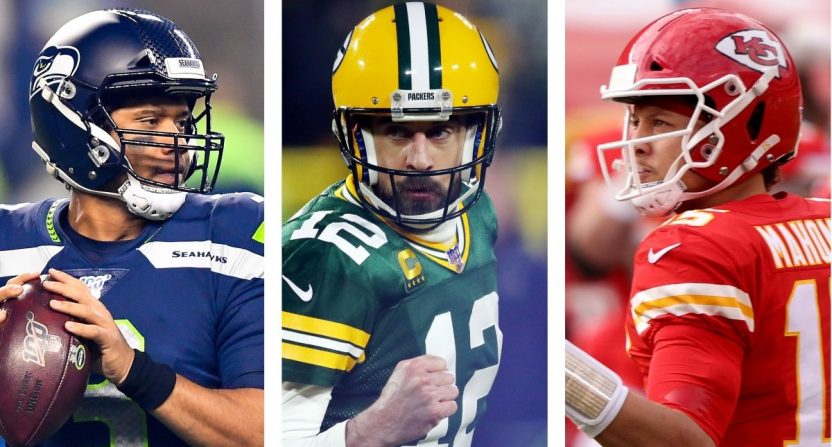 That isn’t to say other positions are less important than the man in the pocket, but it’s incredibly difficult to win a Super Bowl without a competent Quarterback. It’s also one of the biggest reasons that the Most Valuable Player often goes to someone in the QB position.

Of the MVP award winners, the majority of winners are usually QBs. Runningbacks are also popular picks as a potential MVP candidate, but even then they are heavily out shadowed by a player in the pocket.

One of the most interesting NFL futures wagers that you can find is betting on the upcoming MVP. Justification can be made for several players as to why they would win the upcoming MVP, but of course, only one player will have their name called.

As we inch closer and closer to the start of the NFL season, a familiar face currently owns the best odds to win MVP.

Kansas City Chiefs Quarterback Patrick Mahomes is in search of his second MVP award and Betway Sports has Mahomes at +450. Mahomes recently won the award back in 2018.

Immediately behind Mahomes is Aaron Rodgers (+800) and Josh Allen (+1200). Going down the list, there are 12 QBs listed ahead of the next position, which is Derrick Henry at +3330.

Runningbacks are the next best option for MVP honors. Adrian Peterson last won the MVP as a running back in 2012, while Shaun Alexander and LaDainian Tomlinson took home the honors in 2005 and 2006.

Henry has the same odds as Baker Mayfield and owns worse odds than the likes of Ryan Tannehill (+2000) and Matthew Stafford (+1600).

Circling back to Aaron Rodgers, he will be an interesting case to watch. With his current issues involving the Green Bay Packers, there is no certainty that Rodgers will be ready for Week 1 of the season. There is also potential that Rodgers might not even be a Packer for the start of the season. If he misses a start or two, that could dramatically impact his chances at winning MVP.

It’s still preliminary to think of what could transpire between the two sides, but Rodgers’ holdout could change the outlook for himself, the Packers and MVP voting.

The Packers are scheduled to take on the Chiefs on November 7th. That will be a game to watch as it could alter not only the season but MVP voting.

Josh Allen (and the rest of the Buffalo Bills) turned heads last season. The Bills finished first in the AFC East for the first time since 1993 and the Bills reached the AFC Championship game, losing to Mahomes and the Chiefs.

Allen has received MVP votes before but is in search of his first MVP award. The 25-year-old is entering his 4th season with the team and is coming off a 13-3 year, in which he recorded a career-high in Touchdowns (37), Completion Percentage (69.2%) and Passing Yards (4544).

Buffalo will go head-to-head versus the Packers in the Preseason and then will meet the Chiefs on October 10. Thurman Thomas won the award in 1991 and is the only Bills player to win the prestigious award.

It appears to be a three-person race for MVP next season. While anything can happen, Mahomes, Rodgers and Allen are the favorites to bring home the award. Other popular picks (but considered longshots) would be Christian McCaffrey (+4000), Alvin Kamara (+10000) and Ezekiel Elliott (+15000).

RB’s certainly don’t get enough respect in terms of betting odds for the MVP, but it all circles back to how important the Quarterback is to a team. Next season could potentially see another RB win the award, but all betting signs point to the MVP staying within the pocket.

SEE: The Worst Performances at the 2018 NFL Combine

Patrick Mahomes being at the top of the betting odds is no surprise. Rodgers will be a story to follow (especially this offseason) as the Packers and himself either patch the relationship or ship him off. As for Allen, he has helped rejuvenate a proud franchise and looks to keep the momentum brewing in Buffalo.

We’ll need to see which player causes the most damage on the field, but right now Mahomes, Rodgers and Allen are your betting favorites for MVP.