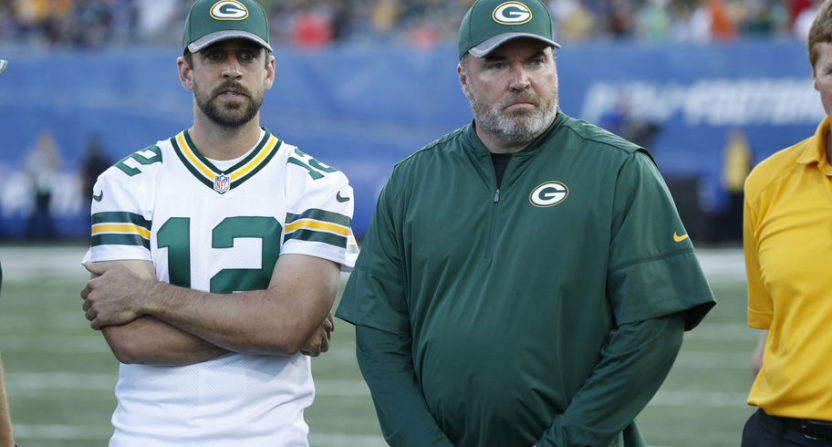 … or pretend to be Alex Trebek. Basically, he’d rather be anywhere than involved with the Green Bay Packers right now.

Ok. Let’s set the stage. Actually, now that I think about it, I’m not sure where this article is going to go. I mean, it’s going to have something to do with the Packers being turds and Aaron Rodgers not playing ball with them—literally. And also something to do with his rivalry with Tom Brady. Your guess is as good as mine, so just keep reading, and I’ll eventually make some coherent point.

Anyhow, Aaron Rodgers, one of the best QBs in NFL history, is supposed to be at camp with the Green Bay Packers. Instead, he’s wearing an ‘I’m Offended’ shirt during an interview while sitting somewhere in Hawai’i.

When asked about his offseason, Rodgers spoke about how nice it was to just enjoy time off and not have to worry about responsibilities or obligations. But it was the way he said it, with some tropical resort in the background, ‘You know, I think that’s what this offseason has been about. It’s been about enjoying my time, spending it where I want to spend it, and not feeling like you have to go anywhere, not having any responsibilities.’

Then closing with, ‘still being an NFL player at the same time, it’s been great. This was a comically stiff jab—with a finger—to the chest of the Packers organization.

He also mentioned That his next responsibility is The Match.

Meanwhile, in the land of the uber-rich and famous, Tom Brady continues to throw shade at Aaron Rodgers and his other opponent, Bryson DeChambeau. Tom jokes that he’s the oldest player in the league and even older than the stadiums … except for Lambeau, but they have added some new things to it recently. But AR’s shade on Green Bay—well, everyone kind of picking on Green Bay—was classic.

Phil Mickelson just won the PGA Championship and is now the oldest winner in history at the tender age of 50. Brady just won the Super Bowl at the Tender age of 43. So, My money has to go on the two old fogies. But who knows, Bryson DeChambeau said that he wants to check the golf balls out because they might feel different out there on the course. Obviously, he was alluding to Deflate-Gate. Maybe that’s why online sportsbooks have Aaron Rodgers and Bryson DeChambeau as moderate -160 favorites.

However, Tom Brady admitted that he played nine holes with Aaron Rodgers a while back, and Rodgers hit an amazing putt on the ninth hole to win. So, Rodgers might be a bit better of a golfer than Brady.

But let’s get real. What were the Packers thinking?

Everybody and their mothers knew that the Packers’ one weakness was viable targets downfield. You can’t have just Devonte Adams. Aaron Rodgers let the organization know exactly what they needed to win a full two years ago. The fans and pundits let the organization know. Heck, the 49ers let the Packers know in the 2019-2020 NFC Championship game when they shut down Rodgers’ only real target and won the game.

But what do they do? Two years of drafting for the future when the Packers are in a position to win the NFC and play in the Super Bowl NOW. They went to the NFC Championship game twice and lost twice. You’re QB who asked for some talent around him still put the team on his back and carried them to the NFC title game and won LEAGUE MVP.

So, I’m going to voice this out loud for everyone. Brian Gutekunst, you are a freaking tool. Everyone else making the big decisions for the drafts over the last few years, you are all tool bags that act as the home to your main tool, Brian Gutekunst.

Despite what you think about Aaron Rodgers and a player or person, it’s hard to say he is the one at fault in this situation. Yes, it takes two to tango. But there is no tango happening. Aaron Rodgers is in Hawai’i and getting ready to head to Montana to play a celebrity golf match for charity.

So, applause, Packers brass. Applause. You $#@&ed up big time.