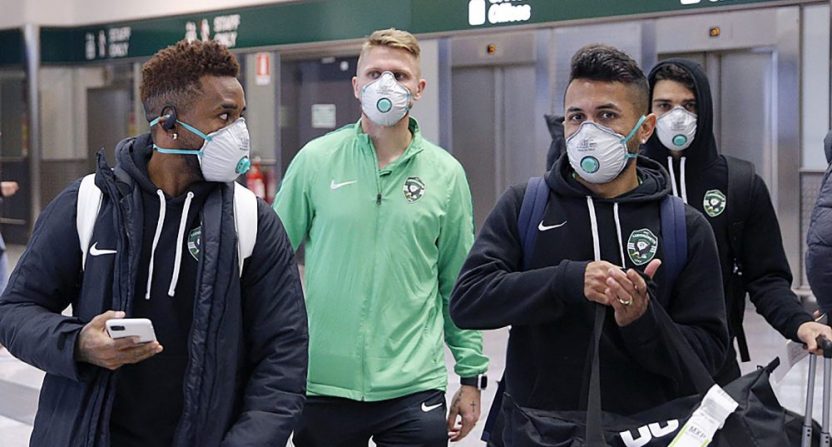 The 2019 Coronavirus or COVID-19 is now becoming a health concern worldwide. There are now over 90,000 cases with a death toll of over 3000. Many countries are already affected by this virus that originally started in Wuhan, China.

There have been travel bans imposed on a few countries and because of this, many industries are affected. The sports industry is no exception. Major and minor sporting events have been either canceled or moved. The people in the industry are becoming worried about the spread of the virus.

Many sporting bodies are canceling events in countries like Italy, China, and the United States because of the threat of the COVID-19. Whether it’s football, basketball, or any other sports industry, everyone is now taking precautionary measures to avoid the virus.

The fans of sports like football, basketball, and tennis would travel just so they can watch their favorites live and to show their support, but with how things are with the spread of the virus, it’s likely that people will have to just watch the matches on TV.

What’s most likely to be not affected is how people and fans would wager on their favorite sports. Thanks to online betting, they can just do this in the comfort of their homes where they are safer. There are many online bookies to choose from and so the only struggle here could be how overwhelming the choices are.

If you’re planning on wagering on any sports online, you can check BetEnemy to know which bookie would work for you. You can take a look at the MelBet review by Betenemy to know what you should be looking for in a bookie. Definitely, betting online is a better option to avoid crowded places where you can catch the virus.

The NBA has recently advised the basketball players by issuing a memo that states how players shouldn’t be giving their fans high-fives anymore. Instead of high-fives, they should just give the fans fist bumps, which are said to be safer. Signing autographs should be thought twice about as well, according to the memo.

Something similar is also now practiced by teams in the football industry. Newcastle United has banned its players from shaking hands. The team has this as a daily tradition. The players and staff would greet each other with a handshake every morning. However, they have recently stopped doing this as this was the advice of the doctor according to Steve Bruce, the team’s manager.

West Ham’s manager, David Moyes, said that fist bumps are also allowed. It’s the handshakes that are banned at the east London club. Here’s what he said about this: ”After consulting with the medical team, we have supplied all the players with hand gel to keep with them. We’ve also agreed to no shaking hands at the moment, just fist bumps.”

Italy has also already postponed five of its top-flight league games. This includes the Juventus-Inter Milan match. The five postponed matches will be held in May of this year instead. The Italian Cup was also postponed for a week.

Switzerland, on the other hand, has already suspended its league until March 23. The clubs have already refused to play with no audience and so postponing the matches really had to happen. The Swiss government has actually banned all events that involve more than 1000 people. This serves as an emergency measure from the government.

The Swiss country already has eight confirmed COVID-19 cases and the officials are already expecting that the outbreak will get worse because of the crisis over the border in northern Italy. The banning of such events will last at least until March 15.

Overall, matches in the Premier League, FIFA Cup, and Football Association Cup are likely to get affected by this as well. For now, these leagues are still monitoring the issue closely to decide which matches will be postponed or canceled.

In tennis, a women’s tour that’s scheduled to happen in April in Xi-an, China is also canceled. China has also forfeited in the Davis Cup. They’d rather do this than to have to travel to Romania for a scheduled match.

The National Collegiate Athletic Association or the NCAA has also spoken about this. The association is still monitoring the issue and is in coordination with the federal, state, and local health officials to be able to decide on what will happen on the scheduled matches across the country.

The association’s chief medical officer, Brian Hainline, has already sent an email to his colleagues that the staff members would be adding appropriate safeguards. The association will deal with this as how it would with any other public health crisis.