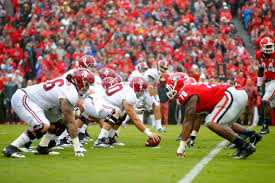 As the NCAA football pushes into the 2020 college football season, we are starting to get a good feel for the teams that have been playing since the beginning of September.

Let’s have a quick look at where each conference stands as we move through the middle of October and head towards November. Check out the BetOnline odds for the best value in each conference!

The Pac-12 has changed its minds, and we are all ecstatic. We’ll see football this 2020 in Duck, Husky, Trojan, and Cardinal land.

The suites that run the show out West had decided not to play any ball until at least January 1st of 2021. However, there was a unanimous reversal towards the end of September. So, now we are just a few weeks away from some fast, spread option, Pac-12 ball.

Despite the fact that the Oregon Ducks title QB, Justin Herbert, hit the highway and is already making a splash in the NFL, they are expected to once again stand on top of the conference. They also lead the conference in recruiting, with three 5-star recruits and seven 4-stars. It says a lot for that the college football odds on the Oregon Ducks to win the National Title are at  +4500. That’s 7th in line on the futures boards, right behind Wisconsin. The Ducks are the favorites to win the Pac-12, but USC is looking like they could shape up to make a run at the Pac-12 title as well, and bookies listed them just behind the Ducks at +200.

As we just mentioned, the Wisconsin Badgers are just ahead of the Ducks on the betting odds boards. But, what’s better about the Big 10 at the moment, is they are getting started on Oct. 23rd with Wisconsin hosting Illinois. The Penn State Nittany Lions are 5th on the list for the national title, but Ohio State is the clear cut favorite to win the Big 10 at -400 and proves that the Big 10 is one of the toughest all-around conferences in NCAAF right now.

The Alabama Crimson Tide is 3-0, starting their season off in dominant fashion, jumping out to an early lead in the SEC West. Both Auburn and Texas A&M are in the chase at 2-1. Over in the SEC East, the Georgia Bulldogs are again standing on top with an early 3-0 record. However, they don’t have a lot of breathing room. The Florida Gators are hot on their heels, and the Volunteers of Tennessee are a surprise, taking down the SC Gamecocks and Mizzou. The Vols have a good chance at moving to 3-1 as they face Kentucky this weekend.

I have to admit; I’m not a big fan of the ACC right now. It’s been a weak conference for too many years, where all though Clemson is a fantastic program, loaded with talent and one of the best coaches in the game, the Tigers have been able to roll into the playoffs with barely a bump and bruise due to light competition. Because of this, the Clemson Tigers are massive favorites at -550 to win the ACC. The swing between the next closest team more than a thousand pennies! Notre Dame is +500.

Game of the Week: Georgia at Alabama

The Alabama Crimson Tide and Georgia Bulldogs will clash on Saturday, and one of them will end up with a loss on their record. If we check the FPI, Bama is worth 26.9, while the Dogs are worth 25.1. So, if these two met on a neutral field, hypothetically, the Tide should win by two points. But since they are in Bama, we have to give the Crimson Tide a field goal. So, as a starting point, Alabama should be favored by 5.

But how does it all line-up?

Alabama has a monster home offense, putting up 52 points per game at home. On any given day, the Tide are smashing the scoreboards with 45 points on average. Defensively, Alabama has allowed 21.5 per game and 24 points at home.

So, the math says the 28 point win margin at home. In comparison, the Dogs have a 27 point win margin on the road. That’s a one point margin. This game is going to be a killer one to watch, and I do believe it will be a one-score affair. There is already 66% of the action going towards Bama. I’m going to wait to see if it pops up to 4.5 or 5, then take the Dogs to get the backdoor cover.