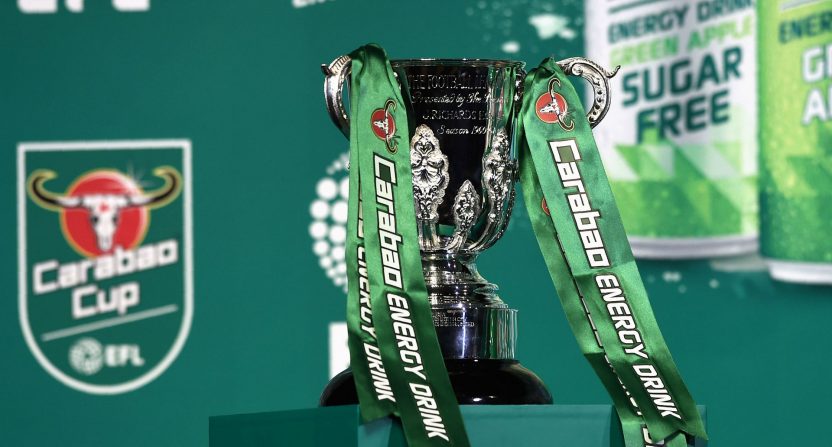 There’s plenty to look forward to in England’s other cup competition, the Carabao Cup. Following the qualification of Premier League heavyweights Arsenal, Manchester City, Tottenham Hotspur as well as hopeful minnows Burton, the stars have aligned for a tournament to remember.

High profile exits early on in previous years in the Carabao Cup (also known as the League Cup) have held charges that the competition isn’t taken as seriously by bigger teams, in contrast to its more prestigious and well-known counterpart the FA Cup.

But once again that’s gone onto be disapproved. A quick glance at the team sheets of Premier League teams in this week’s quarter finals and it was easy to see it was packed with quality.

The draw for the the semi finals saw Manchester City paired up with Burton travelling to the Etihad Stadium. While Tottenham will travel across London meet Chelsea.

Although five time winners Manchester City are favourites to retain the trophy, the odds have risen considerably for the other Premier League teams involved. It makes it a great time to back a winner and if you’re in need of any Premier League betting tips with BetOnline or for English soccer in general, make sure you visit an expert betting community that delivers the time and time again.

There are a number of reasons that the managers of all four teams will be looking to get their hands on this trophy. It was evident from how their teams performed on the pitch during the quarter finals this week.

Holders Manchester City who have won the trophy three times in recent years began well, firing out of the blocks. But Leicester bounced back showing proving City’s desire was matched.

It took City to penalties to see off the Foxes, a different story from the following night when the Carabao Cup was graced by the London derby. It was a fantastic game between old foes, but it was visitors Tottenham who triumphed over Arsenal on this occasion.

Pochettino’s Spurs bombed forward scoring in both halves to seal their victory. It was a classic derby with Arsenal countering with a number of key efforts. But Spurs always looked just comfortable enough to see it through.

But if it was end to end stuff at the Emirates, it was a distinctly different contest over in West London at Stamford Bridge. Chelsea struggled to break down a tough and well-weathered Bournemouth side under the tutelage of Eddie Howe.

Sarri fielded a strong Chelsea side with the likes of Cesc Fabregas, Ruben Loftus-Cheek, Ross Barkley and Willian all set to provide creative outlets for strong man Olivier Giroud up top. But it wasn’t to be, and Sarri and Chelsea fans alike, although happy to be through, will worry that it always seems to be left to their Belgian saviour Eden Hazard to finish the job.

Then what of outsiders Burton Albion. Hailing from a modest working class town in middle England, under coach Nigel Clough they’ve continually punched above their weight, rising through the ranks since he took the job in 1998.

They’ve performed admirably in cup competitions as well in recent history. But it won’t come as much consolation to Clough or Burton for that matter. The manager admitted in his press conference to being ‘frightened’ of their semi final opponents Man City.

Never write off an underdog but it doesn’t seem to bode well for the Brewers from Burton. If that is the case it’ll be left to an all star cast of Premier League might to once again contest this years Carabao Cup.

Make sure you follow a betting community that can provide you with all the tools you need for success. From the rankings and reviews of the best sportsbooks on the market to betting guides and up to date winning betting tips. There’s nowhere better than BetBlazers.com.

The Carabao Cup will be gearing up with two way semi final ties on early next year. Watch this space cause you won’t want to miss it.