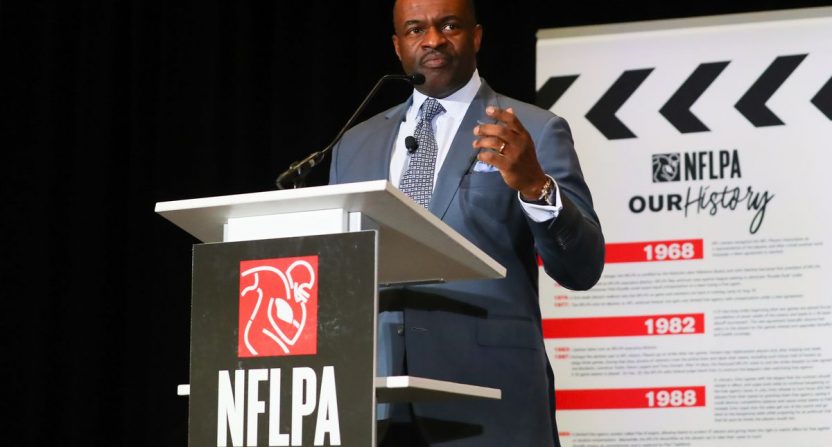 The executive director of the National Football League Player Association is now in the limelight regarding the proposed bargaining agreement for the league and for more than 1,500 players. The union is already pushing to make the votes official before its annual meeting next week that will be held in Miami.

The union already voted to advance the deal to its full membership for a vote. The representatives voted 17-14 but for the members, the proposal should get at least 51 percent of the almost 2,000 population. It’s also known that the 32 owners of the NFL have already approved the proposed deal.

The current collective bargaining agreement of the league is almost up and this is why there has to be a final decision regarding this matter. If in case the players will reject the proposed terms, the negotiations are likely to be pushed until the next offseason. This can be a great risk as the league may have to issue a work stoppage.

Under the proposed bill, the player will be receiving 48 percent of the NFL revenue starting with next year’s season. The increase of revenue split could guarantee 5 billion US dollars to players over the course of the 10-year deal.

The revenue share could increase up to 48.5 percent if a season would consist of 17 regular games. The NFL is reported to already have plans of implementing such a season as early as next year.

The proposed deal also includes the access to future gambling revenues. This would make the NFLPA become the first union to have access to a revenue stream from the gambling industry. Currently, the sports betting industry is on the rise in the US as more states are finally allowing it.

The rise of online betting is undeniable and it’s now a multi-billion-dollar industry in the US alone. Last year, the betting industry made over 15 billion US dollars of revenue and the majority of this comes to form online betting or from online bookies or apps like the William Hill mobile app.

The NFL’s legal counsel, Attorney Darren Heitner spoke about the union’s possible access to gambling revenues. He said, ”I think it could be a significant source of revenue that’s shared between the teams and the players. ”I think it certainly is promising for the players that any sort of sports wagering-related monies that come into the league would be classified as ‘All Revenue’.”

He added, “And in the proposal for the new CBA, that could potentially reach up to 48.5% going to the players. What’s rather interesting is the timing on that particular proposal coming out in concert with the NFL indicating that it’ll now allow individual franchisees to sell sportsbook sponsorships for the first time. I think the NFL certainly sees this is as being a big catalyst for a new form of revenue for the league and has certainly offered the players a very important olive branch.”

There will also be an increase in the players’ salaries under this proposal. There will be 100,000 US dollars increase which means players could earn as much as 610,000 US dollars. If the revenue shares are greater, this could mean that the larger the increase is.

The former players will also benefit from this as pension plans for them will increase by 10 percent. The 401k benefits will also have an initial increase of 30,000 US dollars that will be followed by annual jumps.

When it comes to drug policy, positive marijuana or cannabis tests will no longer lead to suspensions. The testing window will also be cut down to two weeks instead of four months, which the current system has.

Despite the increase in salaries, there are players who are not fans of the proposed terms. NFL stars like Russell Wilson, JJ Watt, and Aaron Rodgers already expressed their rejection towards the proposal. Rogers tweeted, “I voted no last night. My decision to vote no is based on the conversations I have had with the men in my locker room that I’m tasked to represent.”

He continued, “16 games to me was never something to be negotiated. The owners made it clear that the 17th game is about paying for the ‘added’ benefits, and had nothing to do with the positive feedback received about any extra risks involved with the added regular-season game.”

Russell Wilson also came to Twitter and expressed his thoughts. He said, “The NBA and MLB are doing it right. Players come first. All NFL players deserve the same. We should not rush the next 10 years for today’s satisfaction. I VOTE NO. “