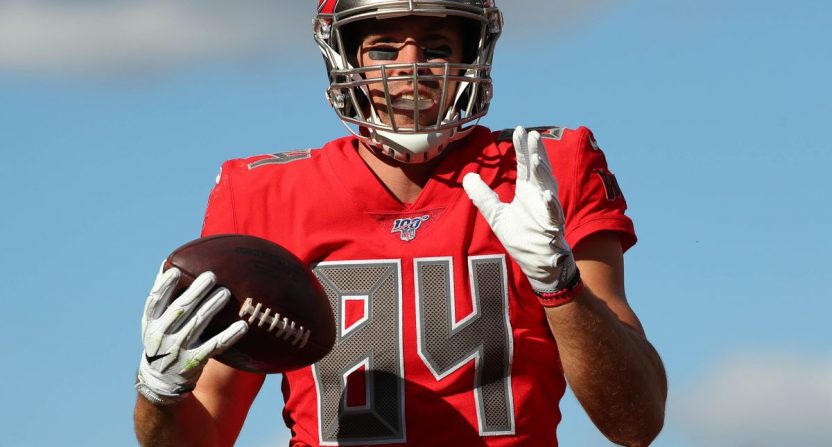 The Tampa Bay Buccaneers are expected by a great season after the arrival in town of Tom Brady. We at L’Insider interviewed Cameron Brate, his teammate, to understand the impact of the NFL GOAT.

A tough debut for the Tampa Bay Buccaneers during the first day of NFL 2020-2021. The team led by Tom Brady, in fact, lost due to the greater precision of the New Orleans Saints, with the final result of 34-23. And yet the season, for Tampa, had not even begun badly, with the first touchdown of the regular season scored by the 43-year-old QB.

However, the NFL season is just beginning and the feeling between Brady and his teammates must certainly be refined. Among those ready to take part of the journey with the GOAT of the oval ball, there is also Cameron Brate. Brady’s teammate, tight end role, Cameron will have the task of protecting his QB and, at the same time, make himself available to receive the ball in any throwing actions. That’s why, we at L’Insider, chose to interview Brate to understand what it means for Tampa, to be put at the center of the NFL map. That’s what happens when you can count on who can boast 6 Super Bowl on the board.

“I would say the biggest change for us is that we were all really tired at the end of training camp. We’re all relieved training camp is over and we’re all really excited we get to play a game at the end of this week. There were definitely some hitches at the beginning of camp with new players – especially with a new quarterback and everything that goes along with that. We were able to work through all of that and we’re definitely more on the same page now. We feel like we’re in a good spot heading into Week 1.”

“I think the thing about coach is he sets the tone with his mentality. He doesn’t really worry about the distractions – he’s focused on how the Bucs are today and how we can improve. That kind of sets the precedent for all of us and how we deal with it as well. The 2020 Bucs have won zero games. It starts with one and hopefully we can get it done on Sunday.”

“I think signing Tom definitely changed the perception of the team locally and nationally. Just looking at our schedule, we have a bunch of primetime games this year, which we’re not really used to down here. Just around the area, whether I’m walking the dog or going out to grab a bite to eat, there’s a bunch of people talking about the Bucs, talking about Tom Brady – everyone’s just really excited down here for the start of the season. Luckily, there haven’t been any hitches thus far in dealing with the coronavirus. Everyone here is really excited and I think nationally there’s a lot of people talking about the Bucs. We’re excited with where we’re at and we’re excited about the expectations that come along with anything.”

(On the main asset Brady has brought to the team)

“I would say with Tom, you’re getting the greatest quarterback of all time. He’s seen it all, he’s had success for two decades and for longer than some of the guys on our team have been alive. His leadership as a quarterback has been unbelievable. Having him has given the entire team a sense of belief that as long as we give ourselves a chance at the end of the game, we’ve got the best quarterback of all time on our side and we’re going to find a way to win the game. Having Tom has helped the offense and the team as a whole with his leadership. As far as the organization, just the expectations that have come from having a quarterback like Tom who is almost transcended beyond the game of football – he’s kind of a pop culture icon as well. It’s brought in greater expectation, greater media coverage and all good stuff that we’re excited about.”

(On how offensive coordinator Byron Leftwich has approached coaching Brady)

“It’s an interesting dynamic. I think Byron might be younger than Tom. They definitely work really well together. They’re more peers than it would really be in a true coach-player dynamic. There’s a lot of collaboration that goes between them. I think one thing Tom does really well is he doesn’t put himself above the team. He responds very well to coaching and he gets coached, too. Those two have a really great relationship and it’s been fun seeing both the way they work together and the respect they have for each other.”

“I think Gronk could fit in with anyone, anywhere, doing anything. He’s one of the easiest guys to get along with I think that I’ve ever met. He has a very infectious personality that makes everything fun, so he’s been awesome in the room. Just like Tom, Gronk is probably one of the greatest tight ends of all time. It’s been awesome seeing the way he prepares, the way he plays and picking up little nuances that he does really well and talking through them with him. Sometimes I’ll point out something that he does and he’ll say, ‘Wow – I do that?’ He doesn’t even realize some of the little things that he does. I think that the best players are kind of like that. It’s just been great having him in the room and being able to learn from him.”