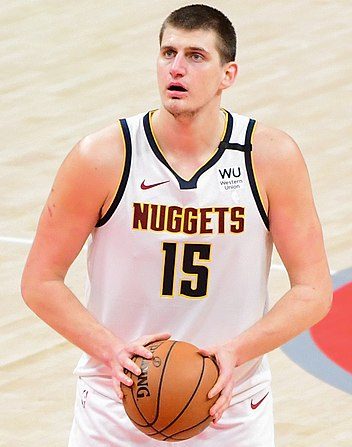 The Miami Heat’s loss to the Denver Nuggets at the Ball Arena on Monday night ended in ugly scenes as Nikola Jokic’s violent body-check on Markieff Morris led to Heat players waiting for Nuggets players in the hallway.

It’s been reported that security had to intervene after Heat star Jimmy Butler led his teammates in search of the opposition in the wake of the reigning MVP’s shove.

Morris did instigate the incident, having gone in for a hard foul on Jokic, who leveled him with a right forearm that sent his head back rather sickeningly. Both players were ejected and, while the NBA was looking into whether the MVP’s actions warrant further punishment, Jokic’s brothers became involved, at least on social media.

Markieff’s twin brother, Marcus, implied he won’t soon forget Jokic shoving his brother from behind via Twitter, which led to The Joker’s brothers, Strahinja and Nemanja, opening an account named “@JokicBrothers” to fire back, according to The Denver Post.

“You should leave this the way it is instead of publicly threatening our brother! Your brother made a dirty play first,” the account posted. “If you want to make a step further be sure we will be waiting for you !! Jokic Brothers.”

The Jokic brothers are understood to have already bought tickets to attend the next game between the teams at Miami’s FTX Arena.

The meeting between the Heat and Nuggets, set for November 29, will be a very interesting one, not least due to the NBA picks on the night.

Marcus has since withdrawn from commenting on social media following orders from his mother.

“Momma said don’t talk on social media no more! Well there you have it,” the Los Angeles Lakers forward wrote. “I love you momma.”

Jokic was aware of the possibility of a suspension following his ejection. Morris, on the other hand, was assessed a flagrant foul 2.

“I love to see the hate! No doubt I took a hard foul which I always do but I’ve never hit a man with his back turned! Luckily we built different over here. I can take my licks and keep pushing. Joker 1 smooth 0 lol,” Morris tweeted on Tuesday.

“That was a very dangerous and dirty play,” Heat coach Erik Spoelstra said after the 113-96 loss. “Keef took a foul, and it was one of those fast-break-take fouls and he did with his shoulder. You might deem that maybe as a little bit more than just slapping somebody, but after watching it on film, it was a take foul. That’s how I saw it. And the play after that’s just absolutely uncalled for.”

Jokic, who recorded a triple-double, scoring 25 points, hauling 15 rebounds, and delivering 10 assists, admitted his actions were ill-advised and claimed to be feeling bad after he was shown footage of Morris’s head snapping back.

“I don’t know who showed me the clip, and actually his head snapped back [after the shove], so I feel really bad… It’s a bad move.”

The Nuggets will be without their top three players when they match up against the Indiana Pacers this Wednesday. Jamal Murray remains injured while Michael Porter Jr. has been nursing a back injury. They will also be without their star center as he has been suspended but head coach Michael Malone wasn’t worried beforehand.

“I will concern myself when they tell us he’s suspended,” he said before the suspension was handed down. “I am not going to waste any of my time looking into my crystal ball and my tea leaves. I don’t have any of that. He’s available until they tell me he’s not. And I don’t see any reason why he wouldn’t be available Wednesday night.”

Morris will be unavailable when the Heat play the Lakers at the Staples Center this Wednesday as he suffered a neck injury from whiplash but Spoelstra suggested his player was alright as he was moving around the locker room on Monday night.

“This whole thing could have been a whole lot uglier if Markieff was actually facing Jokic,” Spoelstra said. “The fact that he had his back turned and he made a play like that, blindsiding him, just a very dangerous play.”

“The video and picture is worth a thousand words,” the coach said of the Heat’s mood in the locker room.

Fox moved its scorebug down between early and late NFL games, prompting NFL RedZone to add its own scorebug