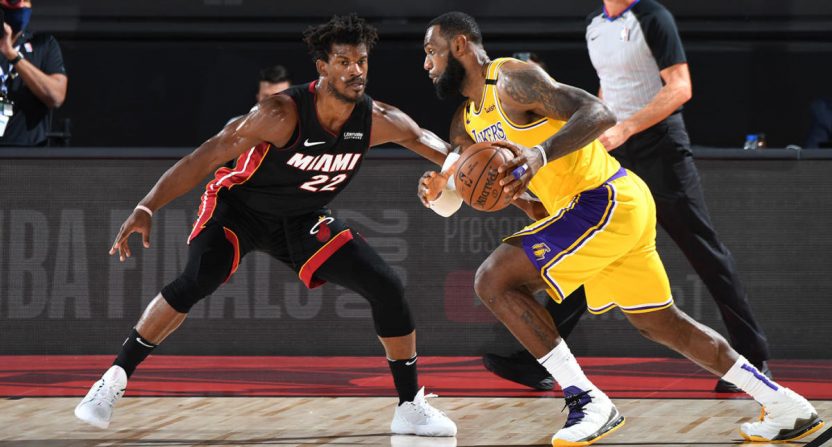 The Los Angeles Lakers are currently taking on the Miami Heat in the NBA Championship final at present. The Lakers are looking to return to their glory days, that included the most successful period between 1996 and 2004, with Shaquille O’Neal and Kobe Bryant playing a key role in this. Including this season, they have also now reached 32 finals, which puts them clear of any other side. The Lakers won 16 of these and lost 15 but will be hoping to extend on this with a finals victory, with their last victory coming back in 2010. The Miami Heat on the other hand have reached six finals, winning three and losing two. The last victory for the side was back in 2013 and they are also just one of five franchises to have reached four consecutive finals.

The Los Angeles Lakers have now finally returned to an NBA final, following a ten-year absence. This is following a 4-1 victory over the Denver Nuggets in the West conference finals. That included a last game 117-107 victory, with LeBron James playing a key role in this success. The 35-year-old is now widely regarded as one of the greatest players in history and the leading light at present and has helped take the Lakers back to the top of the sport, since signing back in 2018.

Prior to the start of the current NBA finals, many of the different markets available had the Lakers going in as the favourites to pick up the victory. This was also a market that proved popular among fans, who continued to support them to pick up their 17th victory. However, it was not a one-sided market, with not much to choose between the two sides.

The Lakers got the series off to a winning start on October 1st, inside the Advent Health Arena. They went into the game as the betting favourites to come out with the victory and to start the series with a victory. This saw then produce a dominating performance to win 116-98, which also included them winning three of the four quarters. The opening quarter was a close one, with the Lakers finishing with a 31-28 lead. They then won the second quarter 34-20, which put them in a commanding lead. The third was a similar story with a 28-19 lead, that all but wrapped up the one-sided game. Miami Heat did produce a comeback in the fourth, winning 31-23 but it was far too late to change the result. The match ended 116-98 to the Lakers, with LeBron James and Anthony David leading the way for the side. With the latter producing 34 points, with nine rebounds and five assists. Jimmy Butler was then the key player for Miami Heat, scoring 23 points.

Game two turned out to be much more competitive one but ultimately resulted in the same outcome with a victory for the Lakers. Following the opening victory, the Lakers were also made the favorites to again take a 2-0 lead in the series, following the dominant performance in game one. It was a similar strong start for the Lakers, who opened up with a 29-23 opening quarter. They then followed this up with a 39-31 second quarter, which again put them in a commanding position to take a 2-0 lead in the finals. Miami Heat then did produce a fight back with a 39-35 win in the third quarter, with the sides then playing out a 21-21 draw in the fourth. It meant another victory for the Lakers, with both LeBron James and Anthony Davis again being the difference for the side with 32 points and 33 points respectively.

Miami Heat needed to win the third game in order to keep their hopes alive of a finals victory and duly did with a 115-104 victory in game three. They had started the game as the underdogs in the betting markets, following the strong start in the series for the Lakers. However, they pulled off the upset and landed the attractive odds going into the match. This was all about Jimmy Butler for Heat, who scored 40 points, with 11 rebounds and 13 assists. Heat kicked off game three by winning the opening two quarters, that included a 26-23 lead following the first. They then continued this impressive performance with a 27-26 third quarter victory. Heat then wrapped up the victory with a 30-24 victory in the fourth, which brought them right back into the series.

The series was then very much wide open going into game four. Following the victory, Miami Heat started much shorter in the betting markets, with the Lakers still going in as the favorites. It also turned out to be the most competitive game to date, with the Lakers ultimately winning the game 102-96. They opened up with a 27-22 lead in the first quarter, before Heat battled back with a 25-22 victory in the second. The Lakers then took control of the game, as they won the final two quarters, that included a 26-23 victory in the third. Both Anthony Davis and LeBron James were the difference and they continue to be the reason why the Lakers have returned again to challenge for the NBA Championship. This included 28 points from James, with the Lakers now short priced favourites to wrap up the championships. Game five will now be taking place on Saturday 10th October, as they have now moved within one win of the title.

Five NFL coaches who should already be on hot seats

Justin Herbert is the real deal

Have you recently joined another online gaming house? Congrats! You would now be able to play many cards...

Professional athletes are clearly a talented bunch. They possess raw physical tools that 99 percent of the population...

“Live each day, as if it we’re your last. It’s written in the stars, and your destiny is...

It’s been a dreadful 2020 for the Jets, who have been defeated in each of their opening six...

An increasing number of professional athletes have been advocating the use of cannabidiol or CBD. The names who...

As the NCAA football pushes into the 2020 college football season, we are starting to get a good...

The electoral map of football, 2020 edition: is the United States more of an NFL or College Football country?

The best and worst from the NBA bubble

Have you recently joined another online gaming house? Congrats! You would now be able to play many cards...

Professional athletes are clearly a talented bunch. They possess raw physical tools that 99 percent of the population...

“Live each day, as if it we’re your last. It’s written in the stars, and your destiny is...

It’s been a dreadful 2020 for the Jets, who have been defeated in each of their opening six...

An increasing number of professional athletes have been advocating the use of cannabidiol or CBD. The names who...

As the NCAA football pushes into the 2020 college football season, we are starting to get a good...